How to half-ass your way to awesome

Anyone who knows me knows that I’m a woman who wants to do it all, sometimes to my own detriment. For me, that means juggling a variety of balls, the most important of which are work, motherhood, marriage, and, of course, my own health and well-being.

But Christine, didn’t you write a book about being Too Busy to Be Happy?

Why yes, I did. And, until about a year ago, I was pretty good at recognizing when I needed to set a ball down and rest.

Then, the pandemic hit and threw all our rhythms off, and took emotional real estate I didn’t have to give.

By now, we’ve all dealt with Zoom fatigue (read more about that here) and pandemic fatigue—which you can’t turn off by pressing a power button—is another beast entirely. From the outside, I know I don’t look as busy as I once did, but you can all probably relate when I say that every day feels like a marathon, and someone keeps moving the finish line.

I’m going to say something crazy, but hear me out: I think it’s time we embrace the idea of half-assing it. 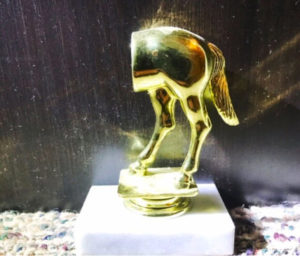 We know that developing productive and positive habits are necessary for success in all areas of life. And since we’re spending so much time at home, there’s also no better time to try something new, whether that be journaling, meditation, or even daily walks. But when our emotional real estate is already so limited, committing to even the smallest change can feel damn near impossible.

So, I say we half-ass it. When we already have such limited emotional real estate, it’s much more manageable to commit to smaller goals than it is to big changes. Inevitably, if we try committing to demands that we simply don’t have the emotional real estate for, then something’s going to give. Imagine deeming it acceptable to give your all one or two times a week, instead of struggling to keep up 100 percent of the time?

In other words, instead of implementing a new habit every day and always half-assing it, do it half the time, but whole-ass it.

Trust me, I’ve done the math, and it checks out. You’ll get the same benefit in half the time, without committing to any “drastic”—and I use those quotes only somewhat ironically—changes.

I had a client who journaled every morning for a week, then got mad at herself when she inevitably wasn’t able to keep it up. Instead of lowering her expectations, she ended up abandoning the practice all together. The all-or-nothing mentality meant that she felt amazing after that first week, but then felt like a failure when she missed just one day.

She told me that she got a lot out of that one week of journaling, so it shouldn’t have been so easy to give it up—except that by nature, people are creatures of efficiency, and so we look for shortcuts. It’s why so many of us fall for the all-or-nothing mindset. Unfortunately, we also all lose out in the end.

That client eventually tried journaling just one day a week, and found the benefits quite impactful. So instead of focusing on five days per week, we opted for Mondays for this particular habit. Yes, it was only 20 percent of the time, but she was able to reap 50 or 60 percent of the rewards. Though it may seem like she was half-assing it, her journaling practice started to bring in some great results.

This idea can apply to work, too. We’re all struggling right now, and it’s probably especially difficult for those starting new jobs or trying to implement new practices. Those going into either with the all-or-nothing mindset are setting themselves up for failure. And it’s on a more drastic scale than not keeping up with a daily journaling routine.

Whether you need to pay more attention during Zoom meetings or you find yourself struggling to focus by the time Friday rolls around, start by committing to whatever you want to change part of the time. Let yourself get the habit right, before worrying about fitting it in 100 percent of the time. Attempt to get the habit right one or two times per week versus five. By starting small, we leave room for positive growth—unlike the other way around, where we inevitably end up falling (and failing).

A Little Something Extra

Subscribe to The Whipp — a newsletter to help you put personal wisdom into professional practice.